Hit enter to search or ESC to close

Workers’ comp rates drop around the US as costs fall

Workers’ compensation rates are falling across the US, a long-running trend that has finally caught up with California, the nation’s largest market, while deepening in others, such as New York.

In California, where carriers set their own rates, State Insurance Commissioner Dave Jones has called for a rate rollback based on a cost benchmark of $1.74 per $100 of payroll expense.

Jones contends that employers in the state are paying 28 percent more than they should be, based on a $1.94 per $100 benchmark he set in January. California ranks among the world’s largest workers’ comp markets, with over 700,000 employers.

California’s 217 workers’ comp carriers collected about 29 percent of the $45bn in premiums shelled out by employers across the US. But the rates they actually collected fell 10 percent to average $2.46 per $100 of payroll, the first decline in almost a decade in the Golden State.

But rates on average have been falling across the US for years, according to AM Best. Even so, it said premiums hit a record high of $58.5bn in 2016 as employment rose.

The rate of increase in net premiums slowed to 0.2 percent that year, however, as a five-year compound annual growth rate of 6.3 percent between 2010 and 2015 cooled. Yet carriers reported a combined ratio that improved by 50 basis points to 95.5 percent in 2016, AM Best said. 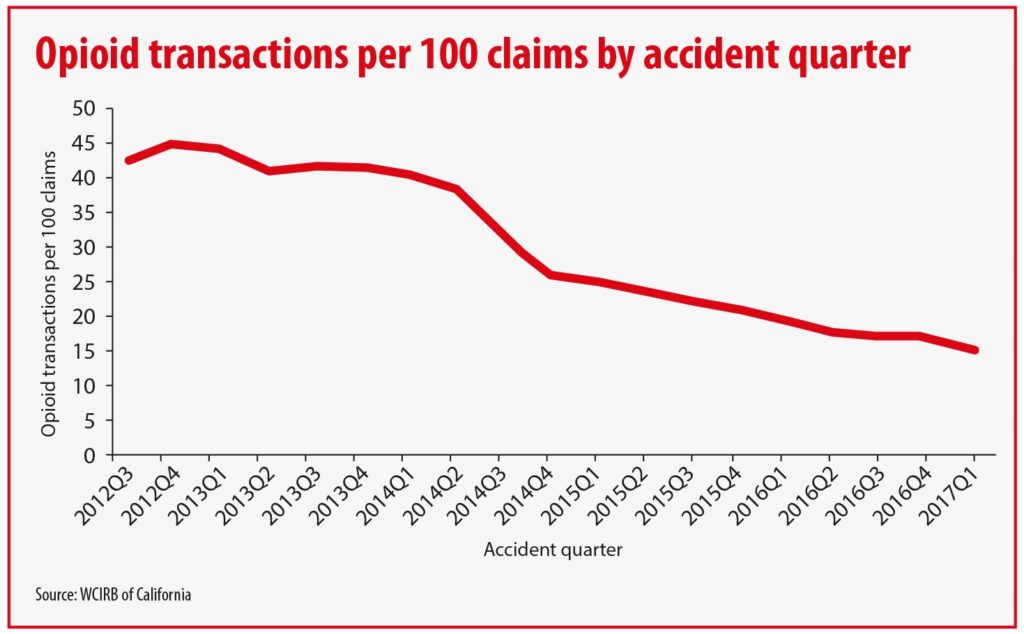 In New York, state regulators are weighing an 11.7 percent rate cut effective on 1 October, following a recommendation last month by the New York Compensation Insurance Rating Board. The reduction would cut employer premium payments by about $800mn, according to legislative leaders.

New York officials cited the benefits of reforms that kicked in last year and helped drive down 2017 rates.

In Florida, regulators rolled back rates by 9.5 percent, effective 1 January of this year. Then on 1 May, insurance commissioner David Altmaier ordered a further 1.8 percent reduction, citing the benefits to carriers of the federal tax cuts enacted in December.

The larger reduction resulted from improvements in claims frequency and loss experience, according to the National Council on Compensation Insurance (NCCI). NCCI guides workers’ comp rates set by regulators in most US states.

In seeking the rate cut, NCCI cited a drop of more than 8 percent in claims frequency in Florida over the previous two years, as well as a decline in carrier expenses.

In Kentucky, employers are in line for a 5.3 percent rate cut, starting on 14 July, according to NCCI. Other states with rate cuts include Arizona, at 4.7 percent, and Illinois, at 3.3 percent.

California’s Jones began urging insurers to pass along the benefits of the federal tax reforms that lowered the top corporate income tax rate to 21 percent from 35 percent almost as soon as the ink was dry on the Republican legislation.

But the state has also experienced another cost-lowering trend, and from an unlikely source.

As the deadly opioid drug epidemic has gripped the US in an ever-tightening squeeze, California’s WCIRB produced a study showing that opioid prescriptions for injured workers have dropped steadily since 2012, falling almost two-thirds by 2017.

The WCIRB study showed that where opioid drugs were prescribed by the end of the quarter following the quarter in which an injury occurred, there were 45 prescriptions per 100 claims at the end of 2012. That ratio fell to 16 per 100 by the end of the first quarter of 2017. It cited heighted awareness of opioid dangers on the part of doctors.

Opioid abuse accounts for a significant portion of compensation claims, as a Travelers study has shown. The big national carrier has cited the financial toll of chronic pain and opioid addiction carrying an economic cost of $560bn to $635bn each year.

A Travelers study showed it could reduce opioid use through predictive analytics and early intervention with alternative therapies. The study found a 30 percent drop in opioid use among 500,000 injured workers tracked since 2015.

This article was first published by Insurance Insider.